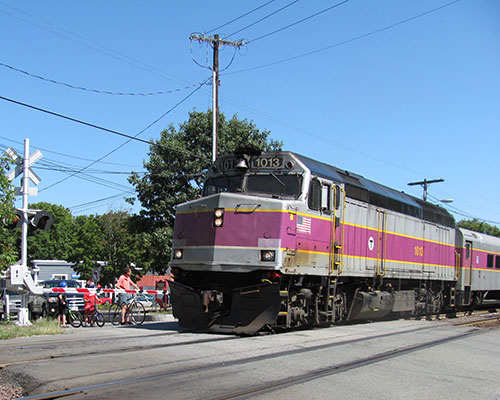 A final decision on a proposed Haverhill commuter rail extension into Plaistow, N.H. will eventually go back to local voters, according to Town Clerk Maryellen Pelletier.

Town leaders in Plaistow, N.H., are to expected to formally notify its local legislators and state transportation officials as town election voters said “no” this week to a proposed Haverhill commuter rail extension and train layover facility in that town.

A citizens’ petition ballot question, asking voters if they support construction and operation of the proposed facilities, received 1,308 “no” votes while 266 voted in favor. A separate town ballot question on whether to spend $3,000 to hold a special town meeting vote if a rail extension study is accepted was rejected by a vote of 1,101 to 488.

One Plaistow area resident told WHAV “the ultimate recommendation of the study—to foist Haverhill’s problem over the border into Plaistow—was pre-determined before it started.”

Plaistow Town Clerk Maryellen Pelletier told WHAV Thursday the citizens petition vote is non-binding while the rejection of a special town meeting could push back a final vote to next year’s town election. Town selectmen, according to Pelletier, have indicated they want the public to vote on the matter.

Plaistow town Moderator Robert D. Harb, a Haverhill attorney, could not be reached for comment by deadline.

Recently, the Plaistow Commuter Rail Extension Study group recommended a plan to locate facilities in the Westville section known as Alternative 2, using Joanne Drive as an access road. It would relocate an existing layover facility near the Bradford commuter rail station in Haverhill. That location has been subject to complaints from neighbors over noise and foul smells from idling trains.

The proposed Westville facility’s projected total capital cost would be $50.5 million and is proposed to be funded by “a federal grant & Massachusetts matching funds; no capital or operating costs anticipated to be paid by either New Hampshire or the Town of Plaistow,” according to study documents.

The study group has considered three alternative site plans, including one that proposed a layover station on the Haverhill side of the state line, parallel to the upper Hilldale Avenue industrial park, and a separate commuter rail station at the Westville Road side of the rail line. A third alternative would place a combined facility off the Main Street railroad crossing near the town center.