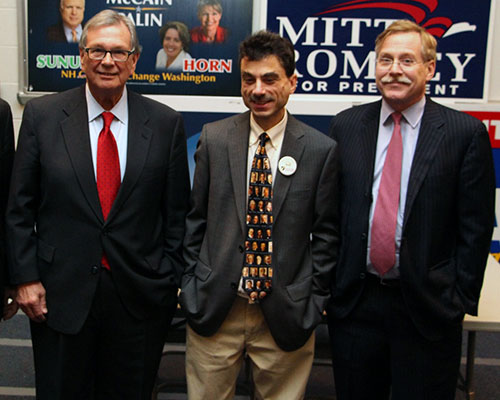 While the two are on opposite sides of the political aisle, they came together to discuss their involvement in politics at the local, state, and national levels; factors leading to a successful political campaign; and how a student can get involved in politics.

Forsberg has been active in Republican politics for decades, ever since he ran for Worcester City Council while still in his 20s (he lost the first time but won on a second try). Highlights of his career include serving as communications director for President George H.W. Bush’s 1988 campaign and his recent leadership in Governor Baker’s campaign. When asked about one of the most memorable experiences in his career, he shared two. “My biggest thrills include the first election that I won to the city council and seeing Charlie Baker win a hard fought victory for governor.”

Charles Baker III (no relation to the governor) has played leadership roles in several presidential campaigns including Dukakis (1988), Clinton/Gore (1992) Gore/Lieberman (2000), Kerry/Edwards (2004) and in Senator Edward Kennedy’s re-election campaign in 1994, when he ran against Mitt Romney. The most exciting campaign was Kennedy’s, and he claims the most “memorable night” of his career was the presidential election in 2000 when he says “we thought we were going to win Florida.”

Baker said that “joy” is a key ingredient to any successful political campaign and he also stressed the importance of being “cutting edge”, using social media, for example, to reach voters and deliver messages.

Forsberg emphasized the importance of “discipline,” describing the mandatory, 6:30 a.m., phone calls to discuss the day’s messaging which George H.W. Bush’s campaign team scheduled daily. He also said that it helps to have adequate funding for advertising since “earned media helps but it doesn’t move the needle, paid media does.”

Those interested in getting involved in political strategy, should start “local”, said Forsberg. “Run for student senate or locally for school committee or city council.”

This presentation was part of Movers, Shakers and Opinion Makers, a series sponsored by the Northern Essex Community College Global Studies Department. The series launched in September with a presentation by Dr. Howard Dean, former Governor of Vermont, presidential candidate, and chair of the Democrat National Committee. On April 14, the series will continue with an event on the eve of the 150th anniversary of the assassination of President Lincoln.