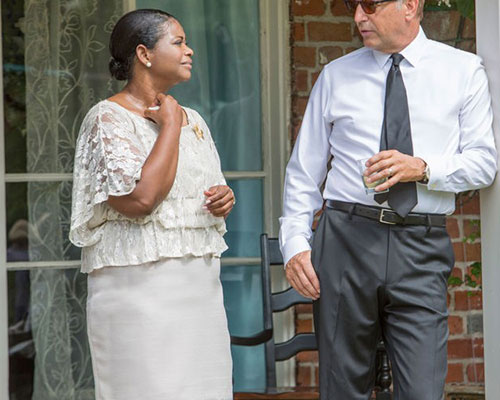 The actual title of Kevin Costner’s new up-close and personal look at race relations is “Black or White,” the question
thrust upon the central characters in this based-on-true-events story.

As the picture starts, we find an approximately 11-year-old Eloise, played by newcomer Jillian Estell, living with her white grandfather, Elliot, the Costner character, following the untimely death of her mother. Eloise’s black father is on the scene only sporadically, thanks to drug addiction and stints in the joint. His mother, Rowena, played by Octavia Spencer, has a rose-colored view of her son, and a notion, which ends up as a court case, to try and have him claim custody of Eloise. As both sides prepare, we are exposed to each tribe’s suspicions of the other, even as they try, in however strained a manner, to interact.

One refreshing theme is the side-by-side on-screen depiction of Elliot’s substance abuse, and that of Eloise’s father, Reggie. The portrayal of rich, white, middle-aged lawyers in their cups has been known to be different from that of young black men smoking rock on the stoop. The laying bare of this hypocrisy is good to see. Costner’s commitment to his role, and to the project are obvious; he reportedly financed a good part of it. Octavia Spencer captures her role as black matriarch perfectly, and with just enough humor to keep her character from going over the top. One potential issue for films like this is that audience members vary in their relationships with members of different races, and/or have varying experiences with the treatment of racial issues in literature and drama…Some, therefore, may find the movie less than edgy or even banal.

Leaving aside such personal calls, “Black or White” is a good story, well-acted, and sensitively written… and a decent post-Oscars pick for your Saturday night.