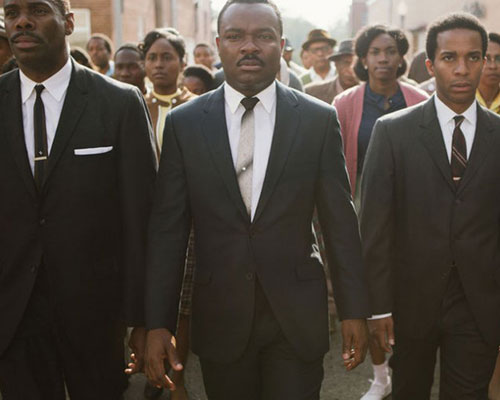 It’s been more than 40 years since Martin Luther King was assassinated, which seems like a long time without much cinematic
interest in his life. If you’ve been waiting, however, the new movie “Selma” has made it worth it. As the title suggests, it isn’t so much a biopic as it is a narrower examination of the man through his handling of a singular struggle, that being the securing of voting rights for African Americans in the South in the mid 1960’s. Selma, Alabama was the head-end of a march to the state’s capital, Montgomery , in pursuit of that goal, and where TV cameras were rolling on some of the worst anti-Civil Rights violence of the era. The outrage generated led directly to the passage of the Voting Rights Acts, weeks later.

Called upon to capture the person of King here is David Oyellowo , who without looking much like King, captures his essence, and especially his oratory. After some stage-setting, Oprah Winfrey’s character, Annie Lee Cooper, opens the movie, as she is prevented from registering to vote by a racist clerk with a literacy test, in as succinct a set-up scene as any movie, ever. One of the things that enhances “Selma” is the interleaving of the behind-the-scenes politicking, much like in 2012’s “Lincoln, “ that we know now was integral to the eventual outcome. Tom Wilkenson plays President Johnson in these machinations , and whether his calculating nature is over- or under-played here is a matter for historians to debate; dramatically speaking, his torment is palpable. Whether you lived thru the era, and can use some triumphalist nostalgia, or are younger and want know more about this time, “Selma” is for you. Sadly, its relevance is enhanced by current efforts to roll back some of what was accomplished.