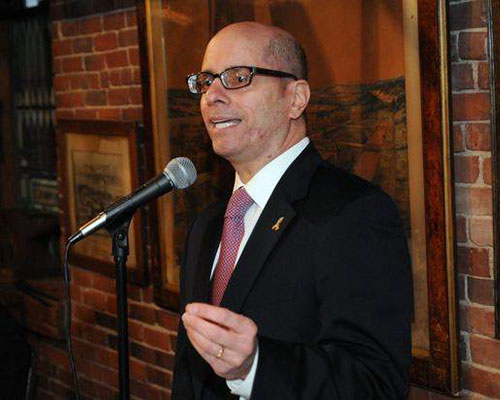 “We’re getting the rank of ‘F’ when it comes to transparency in government and freedom of information in government. That is outrageous. We’re supposed to be Beacon Hill, we’re supposed to be leaders here in Massachusetts,” D’Arcangelo told WHAV News Tuesday. The coalition is housed at the Donald W. Reynolds Journalism Institute, Columbia, Mo.

Jajuga paid a $2,500 fine for late disclosure of his work to site a medical marijuana store in Haverhill. A spokesman for William F. Galvin, secretary of the commonwealth, said Tuesday Jajuga filed last May 22—or about five months late.

Referring to Jajuga’s traditional regard on Beacon Hill, D’Arcangelo said, he should not receive special treatment.

“Regardless of who you know or how popular you are or what position you hold, everybody under my administration will be treated the same.” He said current technology should be used to immediately post disclosure reports.

“I would have it so all of these forms are electronic and then the instant you click submit, it goes up and becomes a public record…there’s no reason that can’t happen,” D’Arcangelo said.

It is not the first time Jajuga’s role as a lobbyist has raised questions. Jajuga reportedly helped clients of Crest Associates receive millions of dollars in state grants while serving as public safety secretary under Acting Governor Jane M. Swift. Jajuga was reported to have subsequently worked for Crest. The state Ethics Commission’s complaints regarding the grants were dismissed in 2008 because the statute of limitations had run out.

Jajuga also came under scrutiny when it was reported he spent $17,000 in anti-terrorism money to buy a 60-inch plasma screen television for his office.

The lobbyist also previously served as the paid president of the Greater Haverhill Chamber of Commerce and a state police trooper.