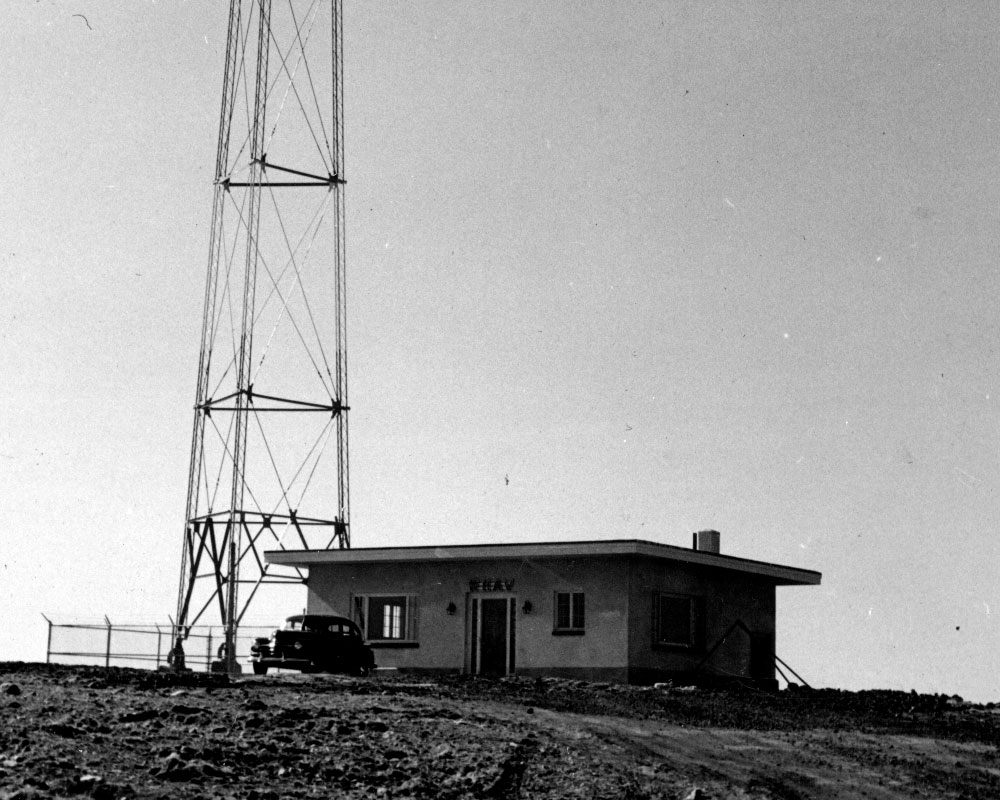 The original 1947 WHAV transmitter building, still in use today by 97.9 WHAV.

First in a Series

WHAV AM 1490 had been on the air a little more than a year in 1948. Although it was an achievement for Haverhill Gazette Publisher John T. “Jack” Russ, it was only a consolation prize.

Russ never intended to build a “standard” broadcast AM radio station. He was enamored by the hope and promise of inventor Major Edwin Howard Armstrong’s high-fidelity, static free frequency modulation (FM). More than that, perhaps, Russ could one-up the Lawrence Eagle-Tribune, which managed to beat the Haverhill Gazette to the air in 1937 with its own WLAW 680 AM.

“FM is the latest in radio transmission with a strong appeal because of its noise-free reception. FM is able to overcome nearly all static, fading and station interference and improves the natural color tone. Fidelity of tone is one of its major accomplishments,” The Gazette reported April 14, 1948 when WHAV-FM station finally went on the air at 92.5 MHz. 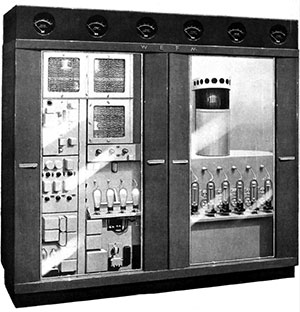 On that day, a switch was unceremoniously flipped on a Western Electric 504B-2 FM transmitter on top of Silver Hill, placing WHAV-FM officially on the air. Those present at the launch would have seen a 42-inch-wide by six and half-foot-tall steel transmitter, with modern glass doors, come to life. Needles on four large meters across the top would have reached their final positions and the glow of six tubes would become visible through the doors. Newly hired Chief Engineer Paul Allan Hurd was likely one of only a few that witnessed the glow. He joined the station a month before, coming from WCCM, Lawrence, where had worked a year. He previously was employed by WDEV Waterbury, Vermont.

Hurd replaced Chief Engineer Herbert W. Brown, who had been on a long-term assignment by an engineering company to set up WHAV. Brown likely came to WHAV in the first place because of his long association with Western Electric, dating back to the 1930s.

To be technical, the transmitter was likely a 1,000-watt Western Electric 503B-2. Western Electric considered the 503B-2 as a standalone FM transmitter, but also a “driver for higher powers.” Eventually, another transmitter cabinet would be added to bring the station to full power—3,000 watts. Thanks to the amplifying effect of the bays on top of the WHAV tower mast, the effective radiated power would become 20,000 watts and reach out up to 50 miles.

The Gazette acknowledged its “interim” authority to launch FM at lower power. 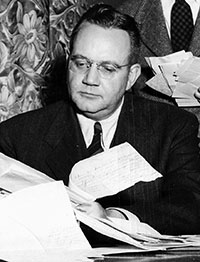 If Russ couldn’t be the first to launch a radio station at this end of the Merrimack Valley, he could at least be the first in the area to launch a powerful FM station. FM development seemed to be moving at a quick pace.

Armstrong patented his FM system in 1934 and put his experimental station on the air in 1938 from Alpine, N.J. Other experimental stations followed including Massachusetts’ first FM station, W1XOJ, Paxton, Mass., in 1939, and W2XOR—the future WOR-FM—on Aug. 1, 1940 in New York City.

In April, 1945, Russ revealed to Haverhill Mayor Albert W. Glynn that an FM radio station “had been under consideration by The Gazette for some time.” He later explained pioneering work on Haverhill’s FM station began in 1944 with help from the industry’s greatest talent.

Famed WOR broadcast engineer Jacob “J.R.” Poppele conducted a survey of possible FM radio sites in Haverhill and identified Silver Hill as the best site. Since Silver Hill was then under the control of the city of Haverhill, however, Ayer’s Hill—the tallest point of land in the city—was initially selected. A year later Frank H. McIntosh, who would develop the iconic McIntosh audio amplifier, provided engineering service.

On April 16, 1945, the Haverhill Gazette submitted, via Washington, D.C. attorney Carl I. Wheat of Wheat and May Attorneys at Law, its application to the FCC for a new FM station at 46.5 MHz. Incidentally, Wheat played a role in the FCC’s development of the FM band as first vice president of the Federal Communications Bar Association. The petition was conditionally granted Dec. 10, 1945.

“Something that might surprise you. I knew Jack Poppele, as did my dad. I had no idea about his connection to Armstrong and Haverhill, though perhaps my dad did,” Doherty said last fall. 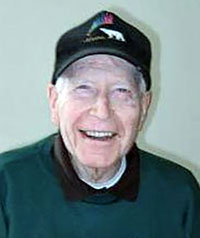 Meanwhile, though, the FCC was being drawn into a battle between Armstrong and Radio Corporation of America (RCA) President David Sarnoff. The pair had been friends since RCA purchased Armstrong’s patent for a superheterodyne receiver—a radio technology still considered superior today. However, relations soured when Sarnoff asked Armstrong to find a solution to annoying radio static.

Armstrong could not find a way of fixing AM radio’s noise and interference issues. Instead, he came back with wideband frequency modulation (FM)—an advanced radio system that threatened to make conventional transmitters and receivers obsolete. All of RCA’s—and its affiliated National Broadcasting Company’s—revenues came from the very system Armstrong would replace. Sarnoff originally gave Armstrong permission to conduct experiments on top of the Empire State Building, but evicted the inventor during April, 1935.

In 1940, Armstrong rejected Sarnoff’s proposal to pay a lump sum for a license on FM patents. Armstrong sought ongoing royalties. The powerful RCA president then put his energy into killing FM altogether.

At the end of World War II—and after 500,000 FM receivers had been manufactured—Sarnoff convinced the FCC in 1945 to move the FM band from 42 to 50 MHz to the band it occupies today, 88 to 108 MHz, to accommodate television. Television channel 1 would occupy the very same frequency WHAV selected. While Armstrong was eventually proven correct that a portion of the band was unsuitable for TV—in fact, channel 1 was eliminated early on—there would be no receivers capable of picking up Russ’ new station.

“Indications are at present that engineering development on FM will continue for some time, not being as far advanced as has been generally believed,” Russ told Haverhill Gazette readers early in 1946.

Still hopeful, Russ and engineers initially picked 96.1 MHz in the new FM band to carry what would become WHAV-FM. Sometime over the next two years, The Gazette would abandon 96.1 in favor of 92.5 MHz.

WHAV’s First FM Station Signs On Just Under the Deadline 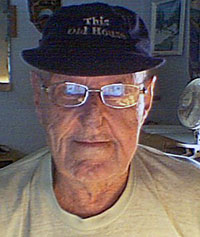 F. Gregory Cronin, an employee of Mario’s Radio Service, 51 River St., Haverhill; a budding engineer; and mostly volunteer, remembers the transmitter having the serial number of “2.” In 2011, he shared his vivid memories of the transmitter building on the hill.

“You walk in the front door. Turn left. You are in the transmitter room. Looking straight ahead was the Western Electric FM transmitter, serial # 2…To the right was the 250-watt Raytheon AM transmitter. Left, against the wall, was the automatic vacuum pump that kept the FM transmission line void of air. If that stopped, the line would short, and there goes the final tubes. To the right of the AM transmitter, was the audio patch panel.”

Cronin also recalled Hurd created an emergency center at Silver Hill to keep the stations on the air in the event of a problem at the downtown studios.

“On the East side of the room, Paul Hurd had built a desk console that could be used for on the air events. It contained one mike and an inexpensive 33 and 78 turntable. We used it a few times for all night operations. In case of a major power failure at 30 How Street, programing might continue from the transmitter, if it had power,” Cronin, now of North Miami, Fla., recalls.

Cronin served in World War II in the 3104 Signal Service Battalion. He helped service all of the communications for the Supreme Headquarters, Allied Expeditionary Force—General Dwight D. Eisenhower’s unit. Upon leaving the service in 1946, he graduated from Massachusetts Radio School, Boston, and Radio School Inc. on the GI bill.

“I received my FCC license in that period. Although I did many things to make money—I started working for Mario’s Radio/TV for about $40 a week until 1955—I opened up (Haverhill Telephone Answering Service) on Merrimack Street…We were located in a building just across the street from Mitchells Department Store,” he remembered.

The Federal Communications Commission (FCC) had grown impatient with stations holding FM construction permits, but foot-dragging on actually putting them on the air. A July, 1948, headline in the trade publication Billboard exclaimed, “FCC Cracks Down on Stalling on FM Completion Dates.”

WHAV-FM barely made its latest deadline. The FCC authorized the FM station Sept. 15, 1947. It then granted extensions to March 1, 1948 and Sept. 30, 1948. Another headline in the same issue of Billboard revealed reasons for FM delays.

“FCC Survey Shows Medium on the Skids.” The story went on to explain the numbers of FM “backouts” had for the first time exceeded the numbers of FM grants. The FCC never took responsibility for its role in the delays or for nearly killing what became today’s dominant radio medium.