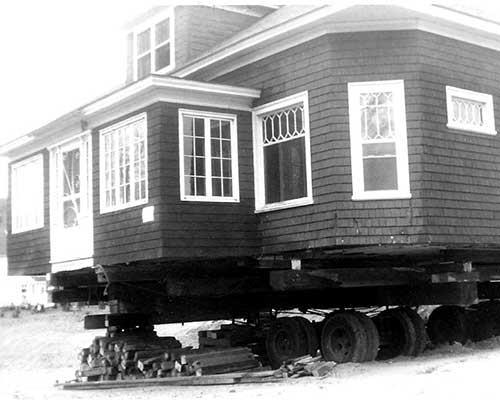 Theodore J. and Virginia M. Brown elected to move their Hollis Street home to Tobey Ave. rather than see it demolished.

Haverhill faced substantial man-made demolition during the 1960s as urban renewal swept through its downtown, but more of its citizens were disrupted by construction of Interstate 495. In both cases, entire streets disappeared, others were rerouted and citizens were widely scattered.

Urban renewal is considered a total failure while few can imagine life without I-495. Oddly, however, there is a connection between the two projects as will be seen below. A recent WHAV Open Mike Show explored the River Street to Gile Street portion—a segment of 23,550 feet. Planning for the highway actually began during the late 1940s.

“This looping 87.3-mile-long expressway, in effect the third belt highway around metropolitan Boston, also serves as a vital connector to the great industrial cities of the Merrimack Valley—Haverhill, Lawrence and Lowell. In its western sweep some 30 miles from Boston, it will pass close to Worcester, and swing south and east again to serve Milford and other manufacturing areas in the south-central area. Thus, the loop, in addition to bypassing the heavily urbanized areas of the north, will provide a much-needed boost to the economic development of the cities and towns it serves by providing swift, easy access to all parts of the state and the nation,” according to Steve Anderson’s bostonroads.com.

The Federal government encouraged construction of what would become the Interstate highway system, but didn’t fully fund it until President Dwight D. “Ike” Eisenhower’s administration came up with “10 cent dollars.” That is, the federal government would pay for up to 90 percent of the system and the states would pay the relatively modest balance. Eisenhower supported the Federal-Aid Highway Act of 1956 which contained new taxes.

On paper, the new “outer circumferential highway” had several names including “Relocated Route 110” and “Route 110 Freeway” until the interstate naming convention was developed in 1957. A public hearing on the River to Gile Streets segment took place Feb. 4, 1959 with final plans approved by Massachusetts Department of Public Works commissioners Dec. 21, 1960. Next steps included demolition, relocation and construction.

The Bradley Book neighborhood in Haverhill faced the most substantial disruption. River Street—or Route 110—had been largely laid out and settled between 1899 and 1939. It, like most of Route 110, closely hugged the Merrimack River with resulting sharp and dangerous curves. Dave Connolly of Haverhill remembered that a particular section of Route 110 near Forest Street was called “the longest curve” in the U.S. This might have been allowed to stand, but for the fact bridge supports for I-495’s Merrimack River crossing would come down into the street. 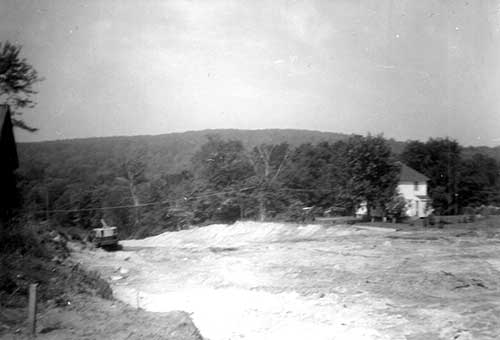 Route 110 in the Bradley Brook area had to be moved north away from the river to accommodate I-495, but there were other streets and homes in the way.

Beginning near Forest Street and traveling eastward, Route 110 was somewhat straightened, carving deep and through an existing hill, forever dead ending a number of cross streets between State Street and Lowell Avenue and wiping Hollis Street off the map. The cross streets were Hanson Street and Grand View, Huntress, Viola, Martin and Odiorne Avenues. Curiously, Grand View Avenue was the key street when developer Frank N. Rand first laid out the neighborhood in 1901 as “Grand View Park.” The surviving southerly portions of Grand View and Viola Avenues still exist, but only on paper.

The impact was particularly strong on Theodore J. and Virginia M. Brown, who elected to move their Hollis Street home to Tobey Avenue rather than see it demolished. Stan’s Donut Shop near what was then the intersection of Hanson and River Streets would not survive for many more years with traffic now largely detoured away from it.

With Hollis Street wiped away, the Commonwealth made alternate provisions for many residents who depended on it for access. State Street was improved and extended east beyond Grand View Avenue to make a direct connection to Huntress. Thornton Avenue was also extended northward to make a connection with the new Route 110.

Today, some of the divided streets have new names. The surviving portions of old River Street are now called Western Avenue and Bank Road respectively. To the north of relocated Route 110, Hanson became Hampton, Huntress became Hunter and Grandview became Canterbury. Lowell Avenue was itself divided by I-495. The portion remaining in Bradley Brook neighborhood became West Lowell Avenue. On the other side, the road was made to bend left to meet Route 110—creating development opportunities that led to Westgate Center and Howard Johnson’s (now CVS and Best Western).

Constructing the remainder of I-495 through Haverhill was rather straightforward, if not disruptive. Leaving the Bradley Brook area, I-495 moved north, requiring construction of underpasses at Broadway (Route 97), North Broadway, Hilldale Avenue, Main Street and North Avenue.

Various WHAV listeners report they used the new I-495 even before it opened. Some used it as a walking shortcut and others for unauthorized motor vehicle traffic. My brother used it for his gasoline-powered go-kart.

Haverhill Holds Up the Works…for a Downtown Connector

A funny thing happened on the way to completion of I-495 in Haverhill—political grand standing, special interests and no consensus.

Simultaneous with the planning of I-495, the Haverhill Housing Authority (as prodded by the city council and others) was planning a new downtown Haverhill through “urban renewal.” A major four-lane thoroughfare (since constructed and called Bailey and Ginty Boulevards) was to be the terminus of a downtown connector from I-495. Almost all recognized downtown Haverhill—then know as the “Northeast Shopping Center”—could not remain a retail center after I-495 was completed unless it was somehow connected to the new highway.

The actual route of the connector was the sticking point. Construction of I-495 had to be delayed while the subject was aired, debated and argued. It had been assumed the connector would begin at Broadway with a substantially widened Route 97 passing near Lafayette Square, crossing Little River and ending at the planned boulevards. The Commonwealth, for its part, acquired extra land at Broadway for an eventual full cloverleaf. The undeveloped land at Monument Street and Broadway is a vestige of this plan.

Meanwhile state Rep. Francis J. “Bevi” Bevilacqua proposed River Street as the connector route with the intention of simultaneously wiping out the “blight” near downtown and creating a scenic river view highway. Once downtown, however, the route was unclear. Would Washington Street (not yet an historic district) be sacrificed?

Others objected to the massive demolition of homes along Route 97 such a passage would require. They suggested building the connector over Little River. Environmentalists and the Army Corps of Engineers saw to it this plan never received serious consideration.

Still others thought the planned Ward Hill Connector, between Route 125 and I-495, might somehow be extended to downtown at the expense of a large swath of Bradford.

The frustration made an awkward appearance in a rather strange 1963 state law. (Thank you to Anthony Komornick, transportation program manager at the Merrimack Valley Planning Commission, for digging up the text.)

AN ACT DIRECTING THE DEPARTMENT OF PUBLIC WORKS TO CONSTRUCT, AS’ PART OF INTERSTATE HIGHWAY ROUTE 495, AN ACCESS ROAD IN THE CITY OF HAVERHILL.

Be it enacted, etc., as follows:

The department of public works is hereby authorized and directed to construct, as part of interstate highway route 495, an access road in the Ward Hill area or the River street area or the Broadway area of the city of Haverhill. Approved August 5, 1963.

With no consensus, but still believing Route 97 would be the final choice, the Haverhill Housing Authority built the downtown boulevards with a Route 97 designation. The state accepted Ginty Boulevard as relocated Route 97, but Bailey Boulevard remained unnumbered until it actually connected somewhere to the west. For many years, citizens derisively called the two boulevards the “road to nowhere.” Meanwhile, the Commonwealth built deceleration lanes on both the northbound and southbound lanes of I-495 at Route 97 and installed signs for “Downtown Haverhill.”

Obviously, the route between the two ends was never constructed.

Although the Ward Hill Connector was never extended beyond Route 125, Steve Anderson has revealed a little known state plan that would have made it a dramatic East-West highway.

Known locally as the Ward Hill Connector, Anderson speculates the highway would have eventually been renamed Route 233 since it would be extended through Groveland and Georgetown, roughly parallel to Route 133, cross I-95 and terminate on the since scrapped plan for a Salem Connector. The cancellation of I-95 through the Lynn Woods sealed the fate of both the Ward Hill extension and the Salem connectors.