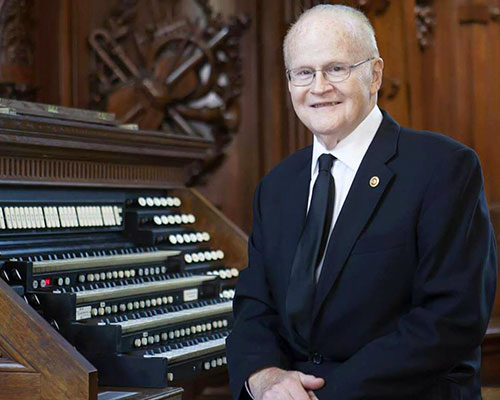 Born in Newburyport, June 9, 1935, he was one of two children of the late Everett T. and Bessie E. (Shute) Noyes and was a graduate of Perley High School. He went on to study finance, accounting, music education and performance at Boston University.

Noyes was a proud veteran of the Korean War, having served four years with the United States Air Force.

As an accomplished musician, mastering both piano and organ, he studied four years at the Chapel of West Point and had also studied under the tutelage of Clifton Lunt. Throughout his life, Noyes has played at Protestant churches, Catholic churches, Jewish synagogues and Seventh Day Adventist churches as well as the music Masters group. Noyes was staff organist for 10 years at Elliott, Woodworth & Rogers Funeral Home, as well as organist at St. Lucy’s and St. Monica’s Church in Methuen. He served on the board of directors of the Methuen Memorial Music Hall and taught music for four years. To give himself a little break from music, he was the manager of the Cinemagic Movie Theaters in Salisbury and Londonderry, N.H.

A longtime member of St. Mary’s Church in Georgetown, he was also a member of the Haverhill Rotary Club, where he was their pianist for 30 years and received the Paul Harris Fellow Award. Noyes was very active in many Masonic bodies, including St. John’s Lodge of Newburyport, Lawrence United Lodge, Merrimack Valley Day Light Lodge, Scottish Rite Valley of the Merrimack and Aleppo Temple Shrine in Wilmington where he was the organist for many years.

He is survived by his sister, Priscilla Duffin of Arizona; a nephew, James Duffin; a niece, Jenifer Meadows; three grandnieces, April, Amber and Autumn; along with many dear friends and lifelong acquaintances.

An hour of visitation will be held Tuesday, March 17 from 9 to 10 a.m. at St. Mary’s Church, 94 Andover Street, Georgetown immediately followed by the Funeral Mass at 10 and burial at Belleville Cemetery, Newburyport. Masonic Services will be conducted by St. John’s Lodge of Newburyport at Elliott, Woodworth & Rogers Family Funeral Home, 35 Green Street, Newburyport on Monday, March 16 at 4 p.m. In lieu of flowers, donations in his memory may be made to the Methuen Memorial Music Hall, 192 Broadway, Methuen, MA 01844.