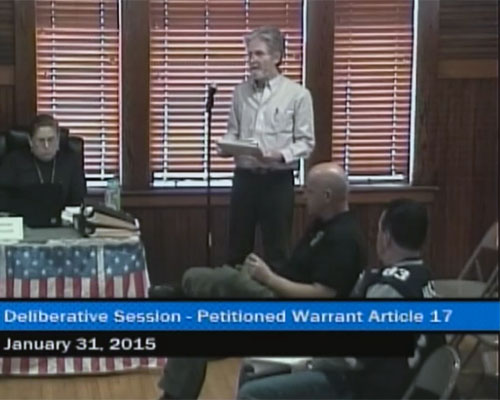 By a two to one margin, voters in the town of Sandown, N.H. backed a petition calling upon their congressional delegation to support a constitutional amendment to regulate unlimited election campaign spending.

The petition, first proposed by resident Craig Buffinton, is part of a nationwide effort to reverse the U.S. Supreme Court’s 2010 “Citizens United” decision. That decision allowed any group to spend unlimited amounts on candidates or causes.

“Constitutional rights were established for the people, not corporations, unions or other artificial entities,” the warrant article declares. Elected representatives along with American people are “guaranteed the right to safeguard fair elections through the authority to regulate political spending.”

Sandown voters cast ballots Tuesday for annual town elections and town meeting warrant articles, including the citizen petition Article 17 to “stand with communities across the country to defend democracy from the influence of big money and to safeguard fair elections, increase transparency and voter participation in our electoral system,” which passed with the unofficial tally of 625 votes in favor, 322 against.

In contested local races, Jonathan Goldman was elected to the Sandown Board of Selectmen over challenger John Quevillon.

During a deliberative session of town meeting on January 31, Buffinton said the 2014 Senate race for N.H. was the tenth most expensive in the U.S., coming in at nearly $26 million. He suggested much of that came from outside Political Action Committees (PACs).

“In the 2012 N.H. gubernatorial election, outside groups spent five times what the candidates spent on their contests. So it wasn’t just that one race. I think it’s important to allow limitations,” Buffinton said.

According to Buffinton, the measure does not call for a constitutional convention, or congressional hearing, which requires action by 34 states.