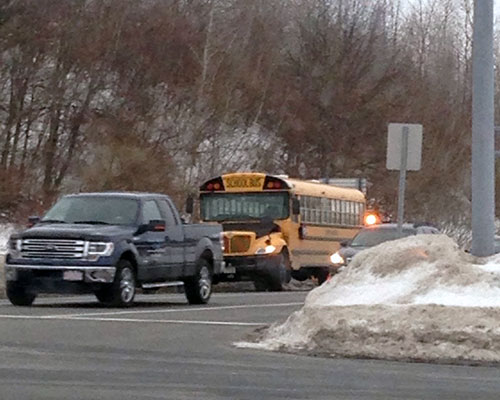 A disabled out-of-town school bus slowed traffic this morning on the northbound side of the Ward Hill Connector. (Sarah Tiso photograph.)

According to Haverhill Police, Lisa Marcano, 20, and Jhonattan Mesia Santana, 29, both of Lawrence, were arrested at 9:26 p.m., Wednesday, at the intersection of Winter and Harrison Streets. Each is charged with distribution of a class B substance, conspiracy to violate drug laws, and drug violation near a school zone or park. Additionally, Santana faces a charge of unlicensed operation of a motor vehicle.

Forty minutes after Harrington’s arrest, another man was arrested and is also facing drug related charges. William Jean, 23, was arrested at 10:10 p.m., Wednesday, at the same intersection of Carlton and South Main St. He is facing charges of drug possession of a class A substance, possession with intent to distribute a class D substance, drug possession of a class C substance and drug violation near a school zone or park area.

In other news, a Haverhill female was arrested due to a warrant and other charges. According to police, Wendy L Duval, 39, was arrested at 6 p.m., Wednesday, at 21 Portland St. She is charged with operating a motor vehicle after suspension, and a lights violation.

A Haverhill man was arrested for a destruction charge. According to police, Anthony Dionne, 20, was arrested at 2:45 p.m., Wednesday, at 35 Nichols St. He is charged with malicious destruction of a motor vehicle.