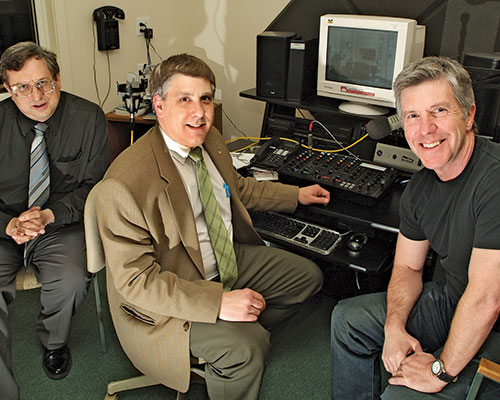 From left to right, Larry Seaman, Tim Coco and Tom Bergeron during the 2006 broadcast of WHAV’s 60th anniversary special. 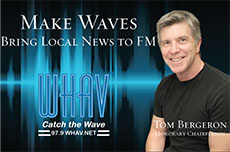 Bergeron, Emmy-winning host of Dancing with the Stars, agreed recently to serve as honorary chairperson of the fundraising campaign called “Make Waves.” He began his career at the original WHAV in 1972, while a 17-year-old Haverhill High School senior.

“Tom has never forgotten his roots and has blessed Haverhill time and again with his appearances and generosity. WHAV needs his help more than ever to raise the substantial amounts necessary to buy FM equipment and erect a new tower. I’m grateful for his support and forever in his debt,” said Tim Coco, WHAV’s volunteer president and general manager. The capital campaign has several components, Coco said. An institutional fundraising effort will overlap with a direct appeal to the public.  To contribute, click here.

Bergeron graciously came to WHAV’s new studios in 2006 for the 60th anniversary of the original WHAV. During the Internet and cable television broadcast, Bergeron was reunited with Gary LaPierre, former WBZ morning news anchor. The two worked closely together at WBZ when Bergeron became the morning radio show host in 1990.

Coco and Bergeron also worked together briefly during the late 1970s at WHAV.

Bergeron has been the host of Dancing with the Stars since the program’s premiere in 2005. Other highlights of his career include guest host on ABC’s Good Morning America, host of Hollywood Squares and host of America’s Funniest Home Videos.

The Federal Communications Commission last month granted the new WHAV a construction permit to build the new station at 97.9 on the FM dial.

The WHAV call letters have been associated with local broadcasting since 1947. WHAV is today operated by Public Media of New England Inc., a not-for-profit corporation. Since 2004, the call has served the Merrimack Valley’s pioneer Internet radio station at WHAV.net and a number of public access cable television stations in Andover, Haverhill and Methuen, and Plaistow and Sandown, N.H. The station is also heard over AM 1640 in northern Haverhill and Plaistow, N.H. The Federal Communications Commission recently granted WHAV a construction permit to build a new FM license at 97.9 MHz.