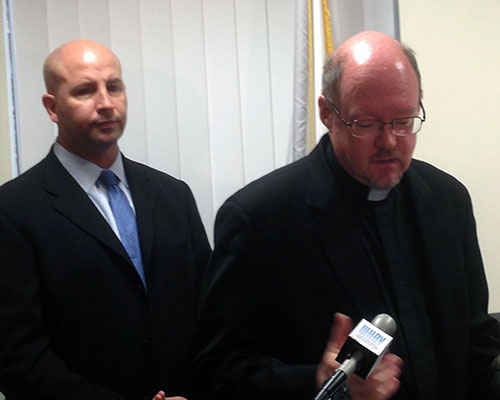 Listen to the entire press conference, as broadcast live by WHAV.

A woman currently facing charges stemming from a recent Portland Street church vandalism case is now also charged in the Christmas Day vandalism of a nativity scene at Sacred Hearts Parish in the Bradford section of the city.

Amarillis Cermeno, 54, listed as homeless, will be arraigned on the additional charges of destruction to a place of worship under $5,000 damage, malicious destruction of property over $250 and larceny over $250. The charges were announced at a news conference broadcast live by WHAV this morning. She will be arraigned Friday in Haverhill District Court in an appearance originally scheduled in connection with the Portland street case.

Charges are the result of an investigation into a baby Jesus statue stolen from Sacred Hearts nativity scene and replaced with a pig’s head. It is believed Cermeno retrieved the pig’s head from a dumpster after it was prepared by a family for a holiday meal. Pistone said Cermeno routinely scours dumpsters for food.

“During an interview of Cermeno, subsequent to her Dec. 30 arrest, she revealed that, unfortunately, due to her homeless situation, she frequents dumpsters and trash for food. We believe a pig’s head may been discarded by someone in our community who had cooked a pig on Christmas Eve, as we have learned that is customary for some in the Latino community to roast pigs on Christmas Eve, and that Cermeno may have come into possession of the pig’s head via the trash,” Pistone said.

Police say the incidents will not be classified as “hate crimes,’ but rather the acts are the result of a “preoccupation with religion,” said detective Lieutenant Robert P. Pistone, police spokesperson. Cermeno is currently in the custody of the department of mental health for evaluation.

“I don’t believe she has the mental capacity for hate,” he said.

Haverhill Mayor James J. Fiorentini said the incident highlights the need to provide mental health assistance for homeless people. “We’re glad it is not what it appeared to be (a hate crime),” Fiorentini said.

Sacred Hearts Pastor John Delaney said “we pray for this woman and support her in her healing.”

Pistone said police have probable cause based on “strong evidence,” but details will be disclosed at the court arraignment.

“The investigation revealed that Cermeno visited Sacred Hearts Church on Dec. 14 and 21, in 2014, and attended services there. The evidence presented at arraignment will reveal that she was in the area of Sacred Hearts Church during the early morning hours of Dec. 25, and also subsequent to Dec. 26, as she was in possession of a metal crucifix that a parishoner had left at the nativity scene,” Pistone said.

Haverhill detectives and a patrolman responded Dec. 30 to a report an individual had written “666” on the church exterior in numerous places, in large numbers with a black marker. A witness had taken a picture of the suspect, described as a female wheeling a suitcase with the American flag. During a search, investigators located Cermeno, who was carrying a large crucifix from, and attempted to strike a detective with it multiple times.The crucifix came from the Sacred Hearts Parish nativity scene and was placed there by a parishioner after the original acts of theft and vandalism.