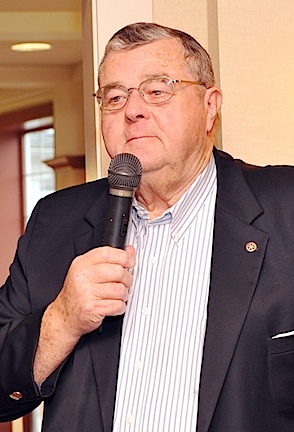 Kingsbury “King” Davis had a surprise for WHAV listeners when he appeared on the Open Mike Show last season.

One of the most memorable and popular of WHAV’s commercials of years gone by was a singing jingle for the King Davis Agency. Davis has generously provided original recordings of those commercials and they were heard again for the first time in 30 years over WHAV.

“For 30-odd years, I drove a station wagon with my name on the side of it…I would drive that car around the community and, where there might be a cluster of children, they would start singing the jingle when they saw the car. Of course, it woke up most of the community at 7 o’clock every morning with the news. I preceded the news (on WHAV),” Davis told listeners.

Davis said the King Davis Real Estate Agency began in offices he shared with his brother George, an insurance salesman, in the Grad Building on Merrimack Street. To save money at the beginning of the venture, his desk was made out of a door set upright with Sears and Roebuck legs. He said the business would not have grown if it weren’t for support from his wife, Suzanne, who took care of the family by day and worked as a telephone operator at night. He also credited associates Roger Chadwick and Francis Cleary for success.

“I was tempted a couple of times when things were really tough to go to Western Electric, go to work over there, but fortunately I hung in with his support and my mother’s support. My father had passed away while I was in Germany in the army.”

Do you remember the words to the jingle? Sing along.