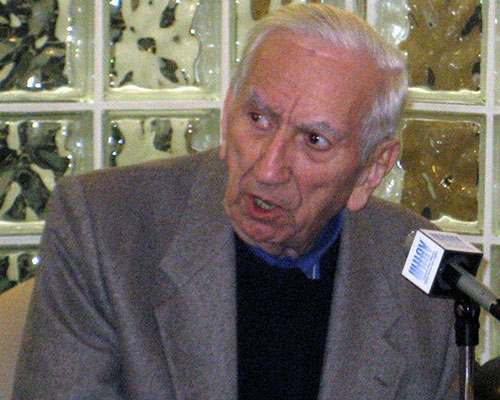 In the years just after the end of World War II, radio changed dramatically. Television was drawing away radio’s staples of dramas, comedies, mysteries and soaps. Radio programming — long dominated by the major networks, NBC, CBS, ABC and Mutual — was giving way to a new generation of entertainers. They were called disc jockeys, and WHAV’s own Phil Christie was one of those pioneers.

The Andover native and current resident appeared on the Open Mike Show with Jack Bevelaqua June 6, 2011.

“Phil Christie was my role model. He was an incredible guy,” said Charlie Mitsakos who called into the program. Mitsakos is known to radio listeners as Chuck Mitchell in Lowell and Bill Barrett in Manchester, N.H. “It is amazing to see that this guy has had such an effect on people for more than 50 years.”

Regular listeners of WHAV hear Christie every hour. The radio veteran, who has been associated with WHAV since about 1948, voices announcements heard between programs. However, between his first stint at WHAV and his latest one today, Christie became a pioneer disc jockey in Boston and New York, among other places.

While Christie was a student at Phillips Academy Andover in the mid-1940s, he found himself mesmerized by radio. He listened to the old WLAW when it was owned by the Hildreth and Rogers Company, publisher of the Eagle-Tribune newspaper. Christie was particularly inspired by the voice of the 1926 Amateur Boxing Middleweight Champion who was now heard on WLAW and later would join WHAV. Christie met Arthur Flynn casually since Flynn dated his next door neighbor.

While still in high school, Christie made himself a fixture at local stations, including newly constructed WCCM and WHAV. He was permitted to give station breaks while a visitor at WCCM, but his first paid gig came when he won the ear of WHAV Station Manager Lew Sargent. Sargent hired Christie to spin records during the “All Request Dancing Party,” Saturday nights.

To bring attention to the new term, “disc jockey,” Sargent sent Christie to the Hooker and Howe Costume Co. in Bradford to rent a horse racing jockey uniform for use in advertising.

Christie graduated from Punchard High School in 1947, but was torn between whether to pursue a career in academia or radio. He decided to attend Boston’s Emerson’s College — well known for turning out successful broadcasters.

He then attended Columbia University where he enrolled in the “NBC School of Announcing” at Rockefeller Center. Christie took classes in NBC’s legendary Studio 8H. There, he met broadcasting luminaries such as Ben Grauer, Milton Berle and Dave Garroway.

Christie’s big break came in 1949 when he went to work for WHDH in Boston. There, he worked with radio’s then-top comedy duo, Bob & Ray.

Talented announcers were in big demand and many moved from station to station as the DJ ruled supreme. Christie was no exception and was called into service at WBZ in 1951. He would serve several stints at the powerhouse station, including as the original host of “Program PM.” The show aired between 6 and 8 p.m. with fans from as far away as Guantanamo, Cuba and even Australia. This was the heyday of Boston radio personalities and Christie was right up there at WBZ with Carl Desuze, Norm Prescott and John Bassett.

In the early 1950s, Christie saw his hometown station grow into the big leagues and wanted to be part of it. WLAW, AM 680, grew to 50,000 watts, opened new studios and targeted the Boston audience. After a frequency swap, WNAC would soon take over the 680 dial position and, years later, become today’s WRKO.

Christie went to work in WLAW’s new studios on the 5th floor of Hotel Bradford, where he worked with Earl “Mr. Midnight” Gynan. Many years later, cigar-chomping Gynan would spend his retirement years, Friday through Sunday nights, on WHAV.

One of Hogan’s Heroes

With the DJ now reining supreme in the nation’s biggest cities, smaller cities like Bridgeport, Connecticut, and Worcester sought the prestige of big city talent. Bob Crane, who would later become Colonel Hogan in the television sitcom Hogan’s Heroes, was at WICC in Bridgeport. He personally hired Christie as his replacement when he left for Hollywood and KNX to take over for Ralph Story.

“He was practically a legend in Bridgeport. He chose me for some odd reason and he cloned me. I don’t know how. I had to take drum lessons. I never played drums before. ‘Cause he played drums. Whatever he did, I had to do, almost.”

While at WICC. Christie moonlighted at New York City’s original DJ station, WNEW. He entertained all night, Saturday nights. WNEW at the time was the famed-home of Martin Block’s “Make-Believe Ballroom.”

Bernie Waterman, who bought Worcester’s WAAB in 1956, also sought to recruit big city DJs. He wined and dined Christie until an offer was made for the prestigious morning slot, and Christie couldn’t refuse. This also gave Christie an opportunity to return home to his Andover roots and make the daily commute to Worcester. That trek, though, almost ended his life and career when Christie was seriously injured in an automobile accident involving his Austin-Healey.

“It was an open car, a convertible. I’m fortunate. Thank God I survived. That’s all I can say. I don’t know how, but here I am,” Christie told listeners during the program.

Recovery from the automobile accident was slow and Christie made the decision to work closer to home. It was now 1961 and Christie hosted the morning show at WCOP, not long after the Boston station adopted the “Top 40” format.

WCOP didn’t stay with Top 40 for long, and Christie relied on old connections from WHDH to follow the music. Phil Goulding, brother of Ray of Bob & Ray fame, was associated with WCAP in Lowell. Christie went to WCAP, but nurtured other connections in the Merrimack Valley. When Lou Rock of WHAV urged Christie’s return to Haverhill, he jumped at the chance.

Christie later followed Lou Rock to WCAX, in Burlington, Vt., but he maintained Merrimack Valley Connections. While working for WFEA in Manchester, N.H. — a station incidentally owned at one time by pop singers Steve Lawrence and Eydie Gormé — he found himself taking on additional duties. After his morning shift at WFEA, he served as executive secretary of the Hampton Beach Chamber of Commerce.

It was time for a new challenge for Christie as radio continued to evolve. FM, in 1967, was about to explode into the dominant medium. WHDH-FM needed someone to rise to the challenge. Christie became program director and helped the station launch its new album rock format. While there he interviewed such rising stars as Linda Ronstadt and Steve Miller.

While at WHDH-FM, Christie coined the term “Underground Radio.” Christie recalls, “WHDH (FM) was playing beautiful music. They didn’t want any of that rock and roll stuff … On WHDH-FM, we tried to set that apart from the AM side which was mostly talk anyway. We had an engineer go down into the subway and he recorded the actual subway. We brought that back and mixed it with music. So, we had the sound of going into the subway, underground, going different.”

Christie rounded out his radio career by bringing rock and roll to WNTN in Newton in 1969, then moved on to WCAS, so named for Watertown, Cambridge, Arlington and Somerville, and then WJIB-FM on commercial wharf.

The complete broadcast is below.